Written by Theo Patt
Updated over a week ago

Below are a few frequently asked questions about Eventive Balloting. Please get in touch using the chat widget in the lower right corner if you have any questions not answered here!

It's easy to get started, and if you have any questions we're here to guide you every step of the way.

How are ballots generated?

Every Physical Event containing at least one balloted film generates a unique ballot.

Ballots for Virtual Screenings will appear below the Still Image window and only be accessible after an audience member clicks Watch Now on that screening.

Films can be excluded from balloting by setting their balloting status to "Not in competition" via each Film's edit page.

Can I use Eventive Balloting with my own custom ballots?

Yes! You can use your existing printed ballots and then use Eventive Balloting for recording votes (no more clunky shared spreadsheets!) and tabulating results.

Can I create balloting categories and multiple competitions?

Yes! Since ballot tabulations can be sorted by the tag applied to the film, you can use tags to identify different balloting categories.

Can I run multiple tabulations and check how the voting is going prior to the close of my event?

Yes, you can run tabulations more than once, and you can see a record of each tabulation via the Tabulate Results button. To avoid bias, preliminary results are never shown. After a tabulation is run, your user account, location, tabulation method & results, and the current date and time will be permanently logged.

Can an audience member change their ranking on a ballot after voting?

Yes! An audience member can change their ranking on a film's ballot any time until tabulation occurs and/or the voting period has closed.

How can I customize ballots for my virtual screenings?

Balloting intro sentence: Shown in bold to all users on virtual screenings that have ballots enabled. The default text is "This virtual screening is eligible for audience awards!" but you can customize it.

Balloting unlock to vote: Shown after the intro to anyone (logged in or logged out) who has not yet unlocked the program. The default text is "Unlock it to cast your vote." but you can customize it.

Balloting watch to vote: Shown after the intro sentence for audience members who have unlocked the screening but not yet watched it. The default text is "Watch it and then cast your vote here." but you can customize it. 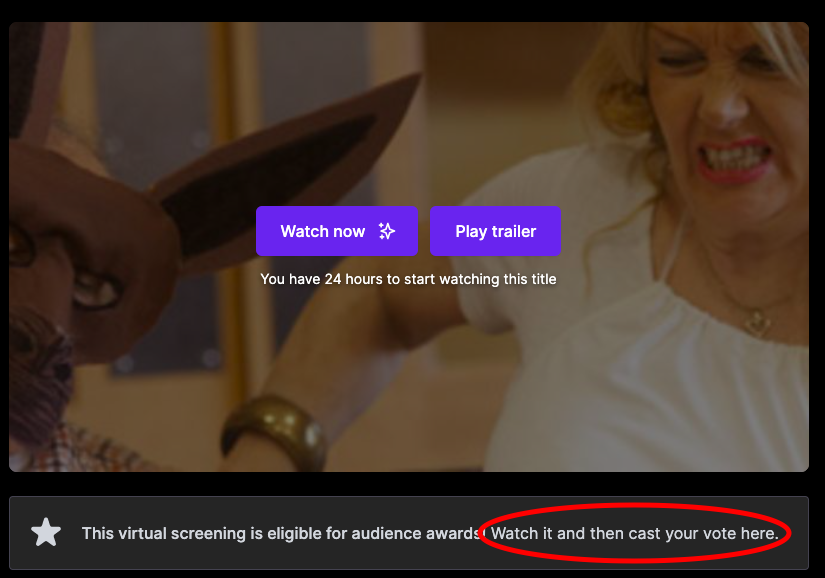 Balloting film not eligible: Shown to audience members when viewing an unballoted film that is contained within a balloted program. The default text is "You're eligible to vote, but this particular film isn't balloted. Try selecting another film in the program." but you can customize it.

Balloting closed message: Shown to all audience members whenever online balloting is set to "closed" in Balloting --> Setup Ballots. The default text is "The voting period has closed. Stay tuned for the results!" but you can customize it.

Did this answer your question?